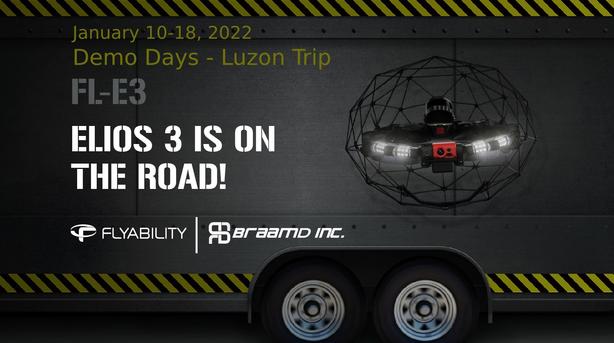 Starting 2023 with a series of BRAAMD Nationwide Roadshow. First stop,  Elios 3 will navigate the chief island of the Philippines, Luzon.  This Live Demo will be conducted by our Flyability Inspection Team together with our principal from Flyability APAC’s Area Sales Manager, Mr. Vanga Ganasan.   Mr. Ganasan more than 10 years of competent drone operational experience from military to civilian and commercial applications.

ELIOS 3 is THE ULTIMATE INDOOR DRONE FOR INSPECTION, MAPPING AND SURVEYING.
Elios 3, the world’s first collision-tolerant drone equipped with a LiDAR sensor for indoor 3D mapping. The drone is powered by a new SLAM engine called FlyAware™ that lets it create 3D models as it flies and accompanied by a new version of Flyability’s software for inspectors, Inspector 4.0.

Flyability pioneered confined space inspection drones with its first product in 2016. With the launch of the Elios 3, it continues its pledge to create cutting edge technology designed to keep humans out of dangerous places to perform the most demanding inspection tasks.

The Elios 3 was made to address the need companies have for reliable inspection tools. As industries around the world scale up their use of drones, they need technology that is easy to use, performs the same way every time, and remains stable when working inside highly sensitive assets.

Do you want to see Flyability Elios 3 live ?  This January 10-18  first leg is full but we can still include you on the ride, send us an email at support@braamd.com to book a seat.


We can also take new demo bookings at a later date, please contact us.

Elios 3 is on the Road